OOTD: I Can't Look At The Stars

I'm obsessed with the song Stars by Grace Potter and the Nocturnals, and there is a line in the chorus of the song where she sings "I can't look at the stars/up on Heaven's boulevard". It's beautiful - if you haven't heard it, go look it up because it's wonderful.

Of course, I CAN look at the stars. I LOVE stars. I used to have moon and stars themed bedroom stuff (of course, who in the late nineties didn't? It was kind of a trend, I think). I even have a space/galaxy dress. Today's dress, however, is a little bit more primitive country inspired. I just saw the fabric and (with my love of stars) knew I had to have it. I feel like a witchy princess in this one and I can't wear it enough. On the unfortunate side, it has started to fade a bit, but that's alright. I'll wear it even when the stars fade. 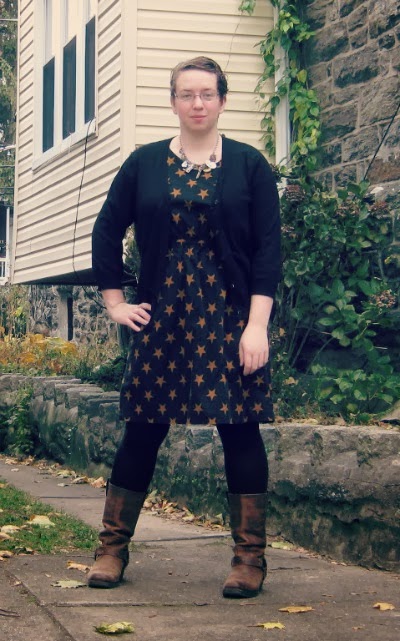 I might link up to Bella Q's Shoe Shine party because even though you've seen these boots, and they are nothing fancy, these are my favorites. (I just ordered replacements in black and as I write this I'm sitting here waiting for the delivery guy.) These boots have seen a lot in the two years I've had them - I've worn them to college, I've worn them to work, and I've worn them in several thrift stores. We've had adventures, as you can tell by the rugged appearance and scuffs. 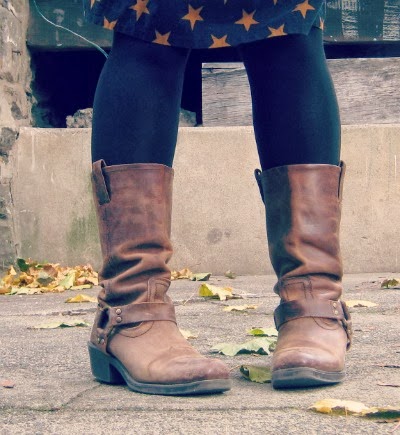 Some seriously well-loved shoes there. You don't have to own a million pairs of shoes to be a shoe-fiend. (Although, to be fair, I probably own waaaaay too many pairs.)

Speaking of friends, let me show you my necklace: 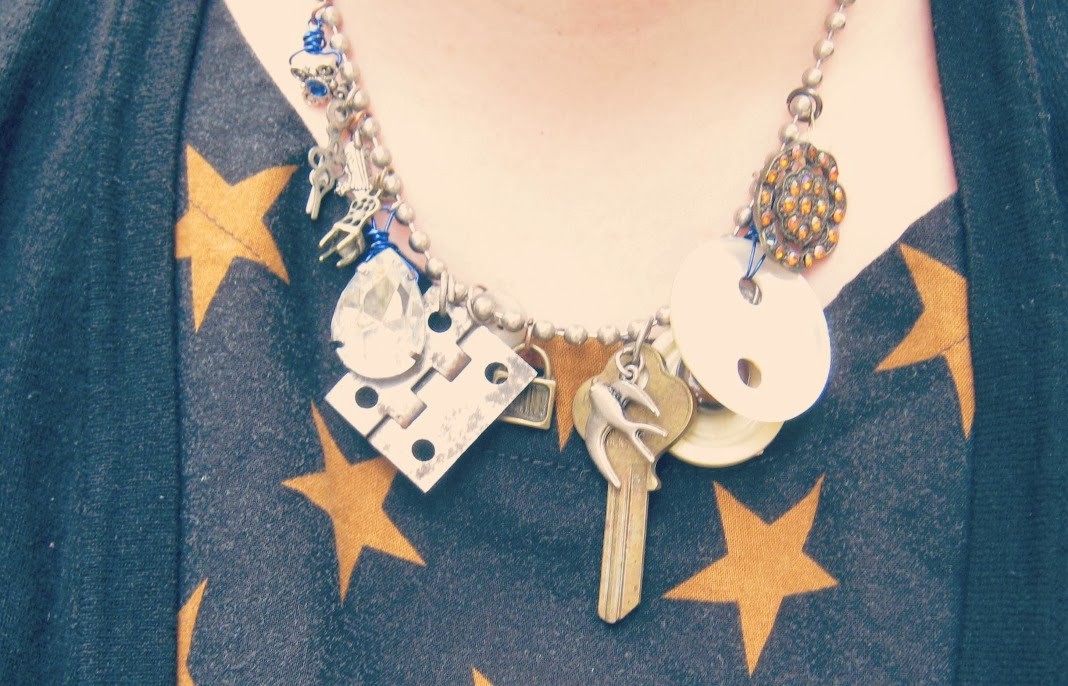 I know I've worn it a bunch but I can't recall if I've ever shown a good close up of it. My boss Angela, the person who gifted me the brown boots, also gifted me this necklace. It's got a bunch of random stuff on it and I love it. When I first got it I think I wore it every day for like a month. I had to take a few things off - for instance there was a giant A on it and a pick-up truck, and as I don't drive and my name starts with an M I replaced those pieces with new charms. The two antique buttons I got from work, the diamond looking thing my boyfriend's Aunt gave me, and the rest came with it.

Well, I'm off to do things. I've got a lot on my mind and not a good way to word any of it. I will tell you this much, though. The next two days will involve a massive amount of coffee, sewing and writing. Hopefully I'll be able to show you something soon.

Until next time!
-Meghan