In a more coherent post, I thought I'd like to show you some recent projects! I realized, unfortunately, that I didn't end up getting any pictures of my outfits over the weekend and I was super excited for them. So, even though I'm not wearing them in these pictures, here are some recent projects of mine that all involve my recent New York trip. 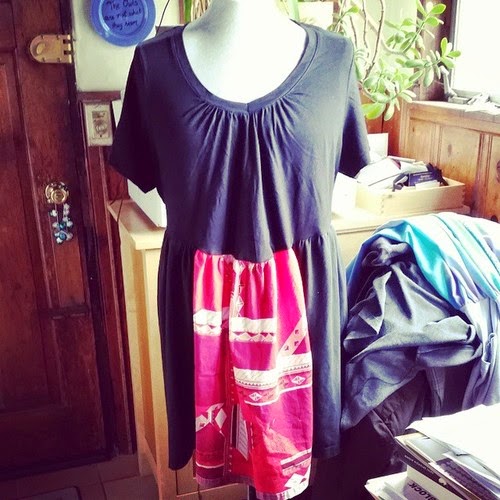 This adorable little black and red number is my new favorite. It's an XL black gathered shirt top with a tee shirt and vintage red tourist shirt for the bottom. For the first time ever, I had a person compliment me on my dress! I wore this up to NYC because it was very comfy and I knew would still look good by dinner time, and while Ally and I were being super chic shopping ladies one of the boutique people said they loved my dress! I was stunned! But I have a witness, y'all, it really happened!

I wish it weren't dirty, I want to wear it to work tomorrow. 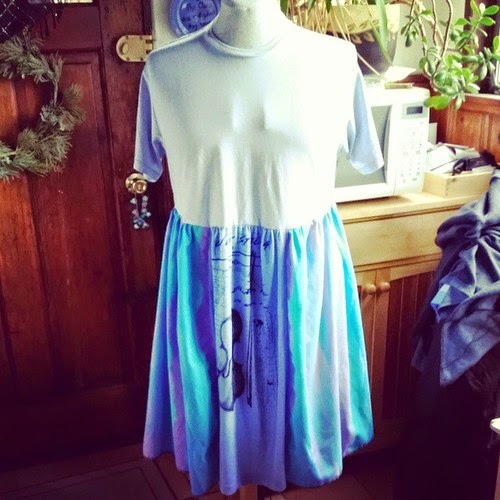 The above dress is a new favorite of mine, too. It's got a vintage table cloth and concert tee bottom with a soft gap tee on top. This was me trying to make a bad memory better- I got the tee shirt at a Lindsay Stirling concert. I was very excited to see the show, but it was horrible. Miss Stirling herself sounded amazing and played very well, but the venue was waaaaay oversold and they turned off the big screen, so if you were under 6 foot and didn't arrive SUPER early to fight towards the front, you didn't see any of the performance. I spent the evening in tears that I paid that much money and still haven't actually 'seen' her in concert.

Still, I bought the shirt, and I do still love her music. Even though the concert was heartbreakingly disappointing. So I tried to make the memory a little better and make a dress! I wore this on the way home because it's very comfy and loose, so I was cozy for the train ride from New York to Philly. I love the floaty colors and blue/purple scheme. 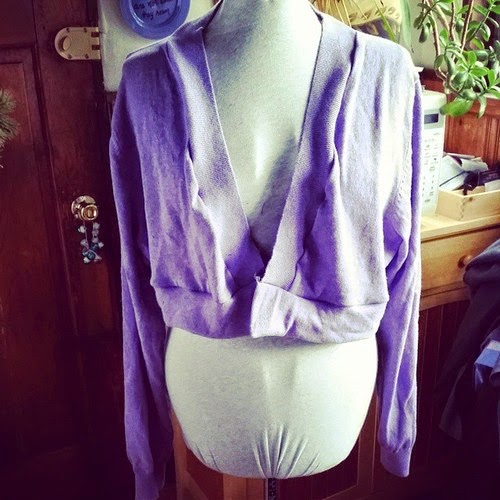 Finally, because it's been getting cooler here, I've been WAY into sweater recons. This sweater was a men's purple crewneck from Philly Aids. I took the bottom and used it to re-trim the neck and make a band for a hem. I also sewed on some snaps for closure. It's supposed to be a loose, cropped, lagenlook-inspired sweater and it's also super warm. I loved the contrast of it with the red in the first dress, and then how it complimented the purple in the second dress, so I wore it all weekend.

I know I've been quiet on the blog. It's because sometimes the things I do IRL don't translate well to the internet so I've not had much to write about. I'm working on it, though. I've been sewing up a storm but most of the things I've been making were for myself or for friends lately. I've been concentrating hard on my writing and I really hope that I can reveal some of that to you soon. ;-) Until next time!