As you all know, I used to have a blog called Meg's Ragged Edge but I needed a change and went to Cirque du Frock. Every once in a while, I do miss my old blog but I believe it's always better to keep moving forward. Still, there were good tutorials and blogs I was proud of on there, so I'd like to start a series where I post some of my old blogs - specifically my tutorials. While I do believe in moving forward, I believe some of my greatest inspiration has from from looking back, too.

This tutorials was originally posted in April of 2012, cringeworthy pictures and all. I got WAY better at writing tutorials, too! LOL.

So you might remember this dress: HERE and HERE

I had this other dress, a purple Banana Republic number that I scored for $1 and felt a little plain in, and I had this bright idea to use a shirt that I'd put in the discard pile to make another wolf dress! Then - AND THEN!!!! - I had the great idea to share with you how I made it. So here you go.

1. Cut out the piece you want to show through. Example: I cut two wolf patches from a shirt. These are the pieces we will sew onto the dress.

2. Trace your patch, pin the four corners and turn inside out. So what I did: I laid the wolf patch onto the dress and traced a chalk outline. I then pinned 1 pin on each of the four corners of the outline. I did this so I would have a general idea when I turned it inside out where to pin the thing.

3. On the inside of the garment, pin your patch. This is pretty self explanatory- but just in case make sure the guideline pins are removed before sewing and that the side facing the fabric is the side you want to show. (I hope that isn't confusing)

4. Sew. Then look at the outside like this picture.

5. Carefully cut the outside layer of fabric away to reveal your picture under!

6. And this is the important one: 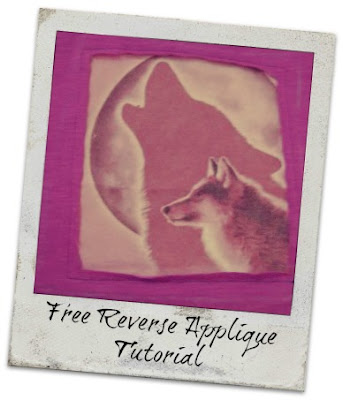