OOTD: All You Sinners, Stand Up

Okay so again with the whole "I'm broke and can't afford crap" approach to blogging- but it's so honestly true. I'm working on making it better, but it's going to be a long and bumpy road which means I've decided to make this current financial situation work in my favor.

The holidays were a little awesome and a little depressing at the same time. On one hand, it's the first time in ten years I've celebrated Christmas with my family and it was awesome. On the other hand, I'm broke and I'm in a new place, missing my old traditions and people. In an effort to cheer myself up, I did do a tiny bit of Black Friday splurging and got myself two 10$ tees from hottopic.com. One thing you've got to know by now is that I'm addicted to band merch. I love it. The problem is most band merchandise doesn't come in plus size unless you count men's shirts, and actually a lot of those are 'slim' cut for the skinny emo boys. So when I ordered my shirts, I knew that I was going to use one of my tutorials to refashion them.

This is the first one. 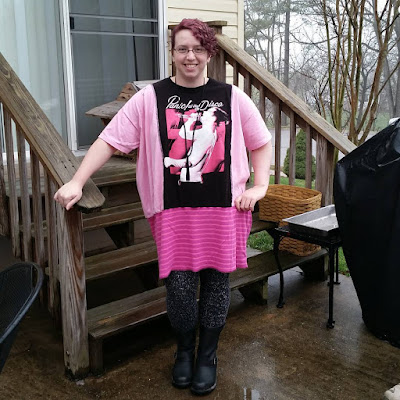 I was going through my breakup just a few months after discovering my love of Panic at the Disco. It was actually kind of appropriate timing since they'd just released Hallelujah and it kind of became my anthem to keep carrying on through the hard times. I tend to cling to music during any kind of difficulty. I remember when I first moved to Philadelphia, MCR's Famous Last Words was on repeat all the time (that's a different blog post altogether).

Anyway, when I saw this super pink shirt on sale at hottopic, I knew it'd be the perfect pick me up. It's rare with projects for me to immediately know what I'm going to do with something. I usually just mash things together and hope they work, but I had a bubble gum pink tee in my stash and a yard of thrifted pink striped knit and I just saw this in my head. I even knew which tutorial I wanted- the Calliope tunic since I seem to be living in that style right now.

I love how this project 1. Looks amazing on me but 2. Took a shirt which I knew even the biggest size would be too small and made it into a comfy garment I'll definitely wear all the time. I love it with my sparkly $5 necklace from Wal Mart (birthday present, thanks Mom!) and my tough-as-nails Frye boots. 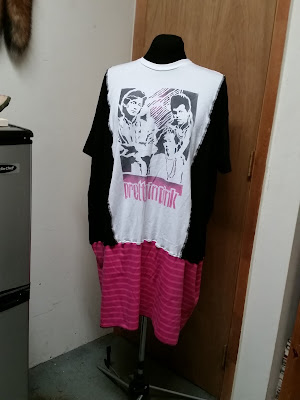 There's a sneaky peak of an upcoming OOTD - This is from one of my favorite shops, Rainbow Alternative. She's a great Philly artist and I miss seeing her booth at the Punk Rock Flea (she's still there, but I'm obvs. in Maryland). Told you, I'm all about the Calliope this Winter/Spring.

So, as delicious as Hallelujah is, a few months after I was so into that song, my ex admitted that he had started listening to P!ATD on my recommendation and really clicked with that song. Which made me want to throw up a little because that was 'my' break-up song! But that's fine, because they also released Emporer's New Clothes, which might just be my favorite music video ever made.

PS: Guys, I can't even tell you how much I'm loving my new hair.

PPS: Special shout out to Sheila, Shawna, Megan and Trees. Without your encouragement, I don't know if I could even write these posts anymore. < 3 you guys give me life.
Posted by Meghan Edge at 8:02 PM