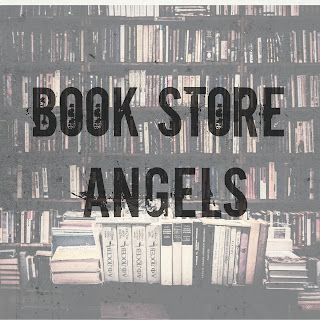 “I’m sitting in front of the bookstore, afraid to go in,” they type into the app. Their legs are shaking, although that could have been from the two hour drive it took them to get to this point, and their heart has sped up to a hummingbird pace. It had been such a pleasant day so far. They spent the morning in rehearsal, emulating the demon they so admired, and then had such a lovely visit with friends that they felt brave enough to go for a small adventure. Long drives were so good for the soul. Open highways on a cloudy, cool day with loud nineties girl music blaring on the radio could soothe every ache in their heart. The Donnas really should have been more popular than they were.

Their friend types back, “But bookstores are safe. You’ll be okay.”

Bookstores are not safe. They are spaces that are off-limits and forbidden.

They just wanted the one book, really. But… there were so many memories that came crashing back down on them every time they tried. It should be easy. No one is watching them, no one cares, but that doesn’t stop the overwhelming guilt and fear that comes from attempting to go in the goddamn store.

They hear his voice, his words, in their mind. The condescending, patronizing tone as if buying a book was just another way they’ve disappointed him.

“Why don’t you read anymore? You used to read all the time,” he’d asked. But also, “I’ve bought you so many books that you never read. If it’s not Watson buggering Holmes you apparently don’t care.” Or, “Why did you go in the store and buy that when I could have just bought it for you from work? I get a discount. You need to learn to save money.” Or, “I know you waited a year for it, but do you really need the hard back? It’s so expensive. Just wait until it comes out in mass market. Why are you crying?” Or, “Why do you read those romance things? Read something that matters.”

They hear the words, even though they are the only one in the car, and they let out a huff of annoyance at themselves and at the ghost of Him. Their head drifts back against the seat and they close their eyes. It shouldn’t matter anymore. Wasn’t the War already won? Weren’t all these battles over?

They bite their lip. Maybe if their friend consents to being texted every thirty seconds, maybe then they could brave the book store. Before they can text her, they see the little dots moving, indicating that she’s writing them again. “Would it make you feel better if you text me the things you saw? That way it’s like I’m there with you and you’re not alone?”

They take a deep breath and agree. Their black glittering converse (those are ridiculous, he says in their brain) make a horrid screeching noise on the pavement as they attempt to enter. Luckily, there are racks of one dollar books on sale outside and they hide their panic by staring at the shelves, pretending to be interested in the stories offered there. (Why are you so weird, he would ask, if he were there witnessing the anxiety attack for himself.) They bite their lip, peeling a bit of skin off, agitating the split there. After several groups of people walk in, they decide it’s okay to push ahead. They just wanted the one copy of the one stupid book- and there it is! Second table in, just by the door. Anxiety over.

Until they see the price.

“FOR A USED BOOK?” They type in all caps to their friend. “That’s insane. What other sections can I find this author in? Maybe there’s a cheaper version, like a mass market.”

As they’re waiting for an answer, they pick up the book again. The first time they’d read it, so very long ago, he’d given them a mass market copy. This one was larger, and the cover was white instead of black, and there was a demon drinking wine on the cover. It was softer. All in all, it was a very nice copy. But what if they still couldn’t crack the cover? What if they still couldn’t open the book and actually read? In the last three weeks, they’d read almost six million words of fanfiction about this book so why couldn’t they just… read it? They’d already read it once, for Christ’s sake! They looked around, wide eyed, panic bubbling up in their throat. Maybe they didn’t deserve the nice copy. (If you’re not going to read it anyway, he would say.)

Suddenly, everything is overwhelming and they have a headache. They are too scared to ask any of the staff nearby for help finding other (less expensive, he supplies) copies of this book. They roam the aisles, eyes unable to focus on the alphabet soup that the book titles are becoming. They type more panicked messages to their friend. The one copy is, apparently, the only copy of the book in the store, although they’re really having trouble focusing enough to look. Their stomach is in knots.

They pause in the romance section, fingers brushing the soft watercolor tones of a Georgette Heyer novel. At one point, they were the only person in their world who knew about this author, and now everyone knew because of an angel. If there were angels here, he would insist they buck up and stop acting like a fool. Two romance novels that hadn’t been in their collection and the biography of a stripper slither into squishy arms, cutting lines into dehydrated flesh as they are embraced tightly. (Why do you only care if there are whores involved, is what he’d ask, if he were here.) It only makes them clutch the books harder.

The angel wouldn’t make fun of them. The rare books section makes them blush as they consider that.

They will admit that, slowly, their stress has faded as they imagine an odd sort of group around them. Their previous muse and his Doctor companion stand watch, ready to fight anyone who is a threat. The Doctor murmurs snide jokes at them whenever they pass another shopper who isn’t wearing a mask correctly. The angel lingers nearby, but so does the demon, and they argue over, “Who buys CDs anymore, angel?”

Their heart is slowing to a more normal level of fucked up as they continue their search, knowing that it’s all for nothing. There is only one copy, the staff member they finally approach tells them with sympathetic eyes. Sadly, it is the expensive book that is waiting patiently at the table by the door. Their lips press together instead of biting, a Watson habit if ever there was one. They are perpetually broke. They are saving money, hopefully, for a better place to live where they can exist beyond the stories they write. They are utterly hopeless. (You don’t need to spend this much on a used book, he scolds in their mind.)

They snag the book, muttering, “Fuck you, ex-boyfriend”, to themselves as they walk to the register. If any of the staff notices, they are too nice to say anything.

(Hope you enjoyed a brief little story I wrote about my book store adventures a few weeks ago. It's hard getting past depression and anxiety these days and this tale felt a bit like a victory. I'm currently in rehearsal for Poems Macabre with A Taste for Murder productions and I'm super excited about it. Tickets available here. It's one of the reasons I've been a tiny bit MIA on the net as a whole.)